The history of the pallet is a long and complicated one, and tied largely to the evolution of industrialization in the United States. Pallet-like platforms have been in use for hundreds of years, but it wasn’t until the 20th century that pallets as we know them today became a staple for many industries.

It Started With A Skid

Wooden skids were the original pallet predecessor, and were made of stringers fastened to top decks. They first appeared around the same time that low-lift trucks entered the scene in the late 1880s. The lift truck could only raise skids a few inches at most and required manual help. They were clumsy and difficult, as all prototypes are, but they got the job done: they allowed workers to move piles of product too heavy for arm muscles alone.

Stacking would arrive some time later, with the arrival of bottom decks after the 1910s. By 1926, newly minted forklift trucks were able to raise pallet loads on top of one another to create space-efficient stacks. Over the next two decades, pallets were slowly refined and enhanced to resemble what we recognize today: spacers were used to ease fork placement, and bottom decks were added for stability.

The Influence of World War II

Pallet development went into overdrive in the early 1940s once wartime production and shipment intensified. Pallet manufacturers realized two things: first, that to adjust shipment standards for each naval installation wasted resources; and second, that pallets were shipping not just to other American factories, but overseas as well.

That led to an effort to standardize sizes and improve capacity. Namely, square pallets measuring 48×48” that could accommodate loads up to 15,000lb. This was a step up from the 2,000lb loads that were more common earlier. This wide scale pallet mobilization also inspired the introduction of four-way pallets and more cost-effective options intended for single-use shipments.

In an effort to regulate the global shipment of millions of pallets, the wartime era was, arguably, the strongest instance of pallet standardization the world had ever seen.

Pallets played a significant role in the early 1960s labor movement, when manual laborers began to worry about the future security of their jobs. Union disputes were common, as palletizers became a crucial concern for union workers who worried about having their jobs replaced by machines. For a number of years, the future of pallet handling was thrown into question: to what extent should they be handled manually versus automatically? History, of course, found room for both.

Meanwhile, in Europe, 1961 was a landmark year. It marked the creation of the European Pallet Association and its mission to standardize pallet use across the continent. The EPA introduced the Euro pallet as a simple four-way entry pallet that could accommodate any forklift or elevating trolley and could be used in any country by any user. The Euro pallet, impressively, is still in use today.

The pallet industry, like any other, has grown larger and more complex with time: more synthetic materials, different sizes, weights, and strengths have all affected the way we view the industry and use the pallets themselves. And while the field is more scattered and industry options more varied than ever before, the past shows us that all pallet innovation has grown out of necessity. It’s not hard to imagine that the future of pallets, whatever it is, will be born out of that very same need. 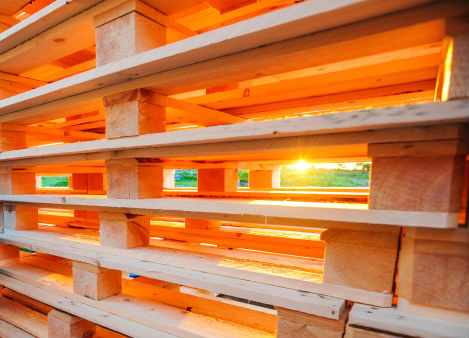